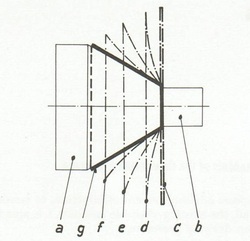 • Metal Spinning is a Trade that is also often refered to as an Art. Metal 4 U Managing Director, Jamie Clapham was instrumental in the development of the currently endorsed training resourses used in the formal training of Metal Spinning Tradesman across Australia today.
• Metal Spinning sometimes has a justifiable reputation of being a dirty, dark and dangerous craft. Metal 4 u has eliminated this reputation by engaging in the development and implementation of formal training, which has subsequently proven that with clear leadership only the "Art and Craft" status remains true.
The diagram (left) shows a basic example of Metal Spinning technique. The circular blank (c) is held between the Spinning Mandrel or Chuck (a) and a live centre attached to the tail stock (b) of the lathe. The circular blank (c) is rotated at speed and gradually formed over the chuck by passing a tool or former over the outside of the part (d,e,f). At the completion of forming the circular blank (g) takes on the shape of the chuck (a).el 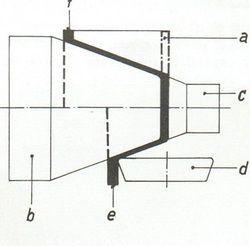 •Flow Forming is another form of Metal Spinning that often relies on stretching the material thickness into length on the formed part.
The diagram (left) shows the circular blank (a) being held between the Mandrel or chuck (b) and the
live centre (c). Whilst the blank is rotated the tool or former is passed over the outside ((e) intermediate stage), generally in one pass to create a completed deep drawn component (t).

Thankyou for visiting metal 4 u About Metal Spinning Page.